You are at:Home»Health»Presence of Aedes albopictus (Asian tiger mosquito) in Greece

Aedes (Stegomyia) albopictus (Asian tiger mosquito) is an invasive mosquito species of health importance, now established in Greece. It was first recorded in Corfu and Thesprotia, between the period 2003-2004. In the current article basic information about the Aedes (Stegomyia) albopictus is provided, such as bioecology, health importance, distribution and available sampling tools for its population monitoring. Moreover, its presence in Greece is presented via thematic maps, as recorded from specimens sent to the Benaki Phytopathological Institute and the National School of Public Health, directly or through the Hellenic Center for Disease Control & Prevention. In addition, the results emerged from the analysis of questionnaires distributed to all companies engaged in mosquito management programs, are presented. Finally, thematic maps of the mean nuisance level during day and night are presented, which was the result of a research accomplished within the project LIFE CONOPS (www.conops.gr).

Aedes (Stegomyia) albopictus (Skuse 1895) or “Asian tiger mosquito” (Asian tiger mosquito) is a mosquito species originating from Eastern Asia and causes intense nuisance (Samanidou 2011). This mosquito species bears white scales, at the adult stage, in the form of a white line on the dorsal side of the thorax (Savvopoulou-Soultani et al. 2011). Adults are relatively small in size, with black and white coloration, and their identification can easily be confused with that of Aedes cretinus, which is restricted in Greece and Turkey (ECDC 2015). It is a multivoltine species, not only having human blood meals, but also having blood meals from mammals and birds. The eggs can survive in dry conditions, whereas the larvae can develop even in small water bodies, such as containers, tree cavities or vehicle tires. The flight range of females is about 200 m.

This mosquito species has already spread into many countries worldwide. It is favored by human activities, particularly by the trade of used car tires and ornamental plants (‘lucky bamboo’) and is included in the list of the top 100 invasive organisms globally (ECDC 2015). It has also a great ecological plasticity with ability to disperse into new areas, even in colder climates (ECDC 2015). According to risk maps, the Asian tiger mosquito is projected to disperse (ECDC 2015).
Ae. albopictus was recorded for the first time in Europe in Albania in 1979 (Savvopoulou et al 2011). Since then it has been distributed to other European countries such as Italy, Greece, France and Germany (ECDC 2015).

According to the Technical Report of ECDC (2012) a protocol is suggested to be applied for invasive mosquito species. Sampling involves both collecting aquatic stages and adult mosquitoes.

The basic method of collecting the eggs are the use of ovitraps, which consist of small black containers, which are half filled with water containing oviposition substrates. After a few days these substrates are collected and transferred to the laboratory for egg hatching and larvae feed until the adult stage.

For the collection of the aquatic the use of a dipper is necessary and the larvae and pupae collected are placed in special containers or small plastic bags with all necessary information written outside.

For capturing adult mosquitoes, adult mosquito traps, with or without attractant (e.g. carbon dioxide or lactic acid) can be used. For instance, BG-Sentinel, Mosquito Magnet and Gravid trap can be used for this purpose. Another method for catching adult mosquitoes are the “human bait collections” (HLC), by using an aspirator collecting adult females in their attempt to bite a human.

Presence of Aedes albopictus in Greece

Its first record in Greece was those in Corfu and Thesprotia by Samanidou-Voyadjoglou et al. (2005) between 2003-2004. Since then the Asian tiger mosquito has been also found in other parts of the country, such as Central Macedonia, the Peloponnese and Attica (Giatropoulos et al. 2012a; Giatropoulos et al. 2012b). For the current study, we have updated the existing maps which depict the presence of Ae. albopictus in Greece.

For the updated thematic maps at Regional Unit level, specimens were sent to the Benaki Phytopathological Institute and the National School of Public Health, directly or through the Hellenic Center for Disease Control & Prevention. The results are presented in Figure 1. In particular, the Regional Units colored red are these where Aedes albopictus has been officially recorded. This means that one of the abovementioned three public entities have received specimens from these areas and confirmed the presence of this mosquito species. The Regional Units which have been surveyed with ovitraps, but where the occurrence of the Asian tiger mosquito was not confirmed, are presented in green. The Regional Units for which no specimens are recorded and therefore no official data exist, are presented in gray. Finally, as regards the Regional Unit of Chania, which is colored orange, the presence of the Asian Tiger mosquito concerns only one specimen (one single adult).

Meanwhile, an effort was made to record the available data from companies involved in the mosquito management programs across the country. In this entomological study the occurrence of Ae. albopictus in Greece was presented in thematic maps, based on the results of a questionnaire distributed to all companies engaged in mosquito management programs. The questionnaire was designed so as to extract information for the presence of Ae. albopictus in the area of their responsibility (at Regional Unit level). 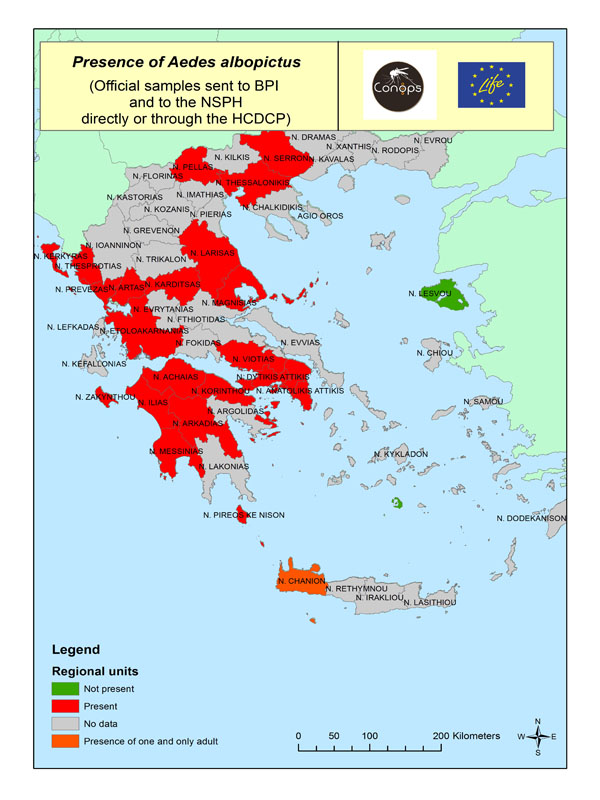 Figure 1: Presence of Aedes albopictus based on official samples sent to Benaki Phytopathological Institute (BPI) and to the National School of Public Health (NSPH), directly or through the Hellenic Center for Disease Control & Prevention (HCDCP). 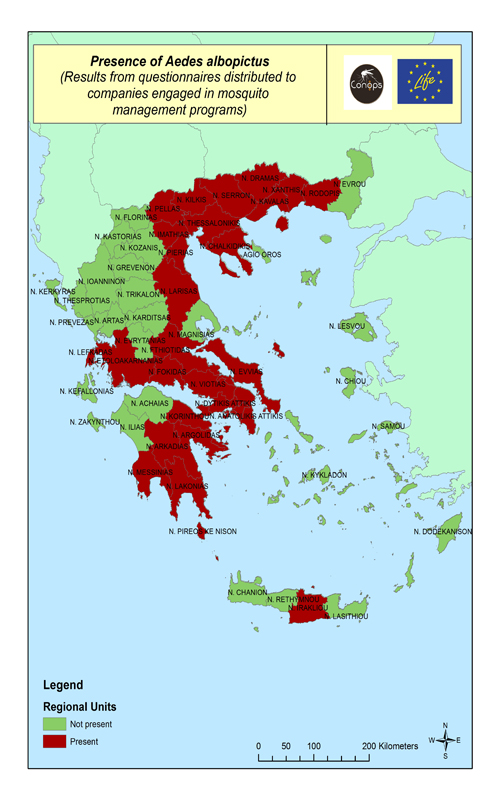 Questionnaires about mosquito nuisance for Attica

In the framework of LIFE CONOPS project which studies the impact of the Asian tiger mosquito in Greece and Italy, a questionnaire was distributed among citizens of various municipalities of Attica. The questionnaire was designed to record the nuisance caused by mosquitoes. The research focused only on the Region of Attica and, therefore, Figure 3 shows the average nuisance in Attica, at municipality level, during the day and night. As it has been already mentioned, the Asian tiger mosquito is active during the day and therefore there was an attempt to record its nuisance during the day and night. 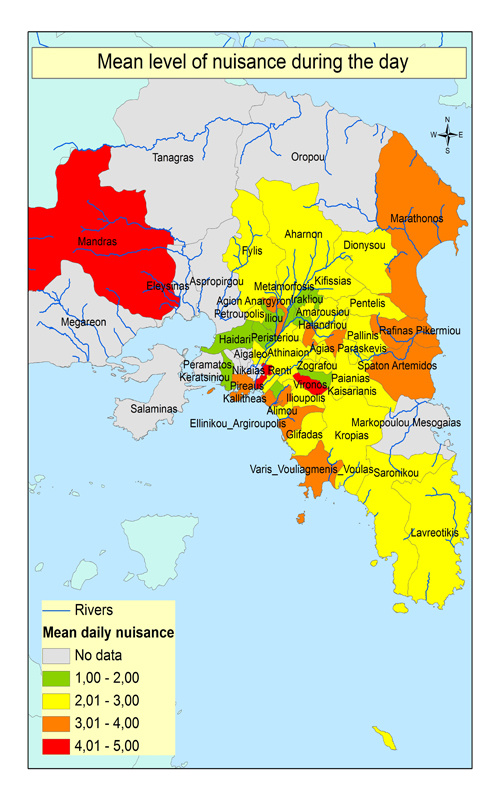 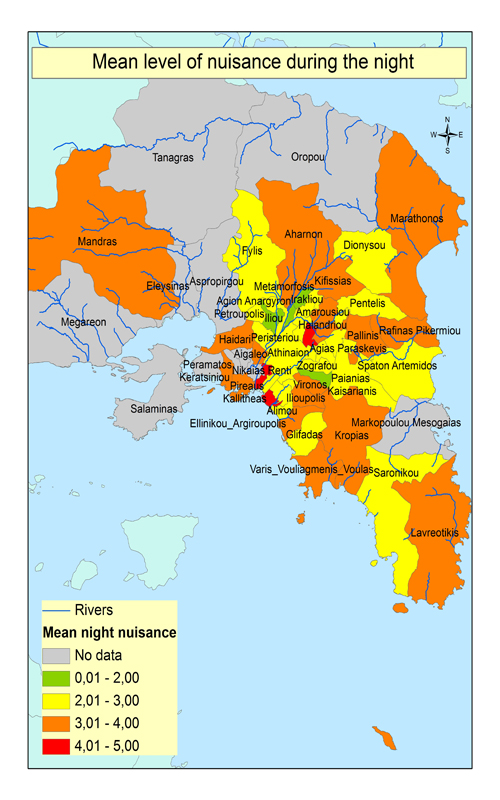 Figure 3: Average nuisance level in Attica, at municipality level, during the day and night

It should be noted that all the above mentioned studies refer to data that had been gathered until 2014, without including data from specimens collected during the first and second quarter of 2015.

The data gathered from companies involved in mosquito management programs, although indicative in many cases, should be used as a step for the further investigation of the problem by installing ovitrap networks.

Data from the Regional Unit of Evros and the island of Crete are particularly interesting, since Evros borders Turkey (no data are available) and the findings from Crete cannot still lead to firm conclusions.

As regards Attica, maps depicting the nuisance levels during the day and night, showed that areas which rivers traverse presented higher levels of nuisance in comparison to other municipalities of Attica.

Consequently, the designed maps highlighted the need for a coordinated entomological research into the Asian tiger mosquito, in order to draw firm conclusions about its spatial distribution in Greece.

This study was accomplished in the framework of LIFE CONOPS project, Development & demonstration of management plans against -the climate change enhanced- invasive mosquitoes in South Europe (LIFE CONOPS – LIFE12 ENV/GR/000466), which is co-funded by the European Commission (www.conops.gr, http://ec.europa.eu/environment/life/ind​ex.htm). Authors express their gratitude to the companies involved in mosquito management programs which participated willingly in the conducted survey, and the Hellenic Center for Disease Control & Prevention for the provided data on the occurrence of Aedes albopictus.

Giatropoulos A (2013) The public health importance of the Asian tiger mosquito. https://www.conops.gr/public-health-tiger/

ECDC (2012) Technical report. Guidelines for the surveillance of invasive mosquitoes in Europe. Stockholm