You are at:Home»Articles»Distribution of Culex tritaeniorhynchus over the world and in Greece

This species was first recorded in Greece in 2003 from samples which were taken from a coastal marsh in the area of Marathon, Prefecture of Attica by Anna Samanidou and R.E. Harbach. Based on their finding and a previous single record in Albania, A. Samanidou and R.E. Harbach suggested that this species was probably widely distributed in Greece and that southeastern Europe lies at the periphery of the species range.

During studies on mosquitoes present in western Greece from Agricultural University of Athens, this specieshas been recorded continuously from 2008 to 2013, in rice fields of Aitoloakarnania (see more details in Hellenic Plant Protection Journal). Moreover, when mosquito species composition and seasonal abundance were studied in the same area of Western Greece over a three year period (2009-2011). Cx. tritaeniorhynchus constituted the most abundant species representing 85.1%, 93.5% and 96.1% of the total number of the mosquitoin 2009, 2010 and 2011, respectively (see more details in Acta Tropica).

The species Cx. tritaeniorhynchus has been recorded again in the area of Marathon from researchers of the Benaki Phytopathological Institute (2012-2013) (see page 194 in 15th Panhellenic Entomological Congress – Book of Abstracts) and in the island of Kefalonia during mosquitoes’ larva surveys from Agricultural University of Athens (Lytra, unpublished data).

However, except the above mentioned records there is no other available information regarding the presence of Cx. tritaeniorhynchus in Greece or other European country. 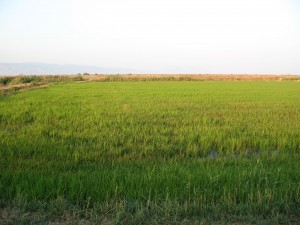 The literature review and the studies conducted from the Agricultural University of Athens are derived from a research that has been co-financed by the European Union (European Social Fund – ESF) and Greek national funds through the Operational Program “Education and Lifelong Learning” of the National Strategic Reference Framework (NSRF) – Research Funding Program: Heracleitus II. Investing in knowledge society through the European Social Fund.