You are at:Home»Articles»Morphology and biology of the Asian tiger mosquito 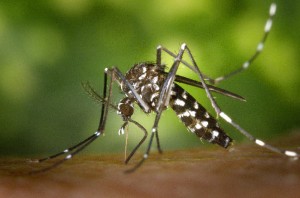 The Asian tiger mosquito (Aedes albopictus) is a black-white mosquito of normal size with similar body length to that of the House common mosquito Culex pipiens (5-6 mm). Females are aggressive usually biting during the daylight and their peak activity is observed early in the morning (06:00 to 08:00) and late afternoon (16:00 to 18:00). Females usually seek humans near the ground surface and prefer to bite them at the ankles and knees. Ae. albopictus is considered a typical exophagic mosquito species, since it prefers to bite hosts outdoors. Except humans, it bites other mammals with ease as well and occasionally can feed on bird blood. After each blood meal gravid females seek suitable breeding sites 2-3 days later to lay their eggs. Under laboratory conditions the female of Ae. albopictus can lay up to 950 eggs during its lifetime, whereas the average reproductive capacity is about 300 to 350 eggs per female. In temperate regions, such as Greece, this mosquito diapauses at the egg stage during winter.

The larval stage of Ae. albopictus lasts 5-10 days and the pupal stage lasts 2-3 days depending on temperature and the availability of food, therefore this mosquito species may have many generations every year. The biting females live about 4-8 weeks in laboratory conditions but can also survive up to 3-6 months.

Ae. albopictus has a short flight range, which is usually less than 100 meters and rarely reaches 500 meters away from its breeding sites.