You are at:Home»Articles»Control of the Asian tiger mosquito 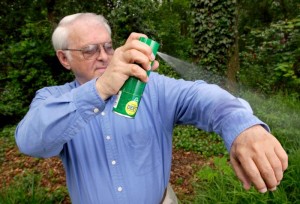 The Asian tiger mosquito (Aedes albopictus) prefers to breed in small water bodies in artificial containers, such as small pots, flower pot saucers, vases, barrels, manholes, old tires. Females usually do not flight more than 100 meters away from their breeding sites to find hosts. Therefore, the thorough inspection for potential breeding sites and their elimination (e.g. through drainage) or appropriate management (e.g. coverage of the breeding sites) in houses or in surrounding areas contribute to the control of Ae. albopictus. Moreover, the standard measures of personal protection can be used against mosquito bites, such as insect repellents for skin and clothes or insecticides for indoor or outdoor use (e.g. vaporizing mats, liquid vaporizers and mosquito coils).

It should be noted that the chemical control of the Asian tiger mosquito, as that of mosquitoes in general, should focus on the control of larvae in stagnant water. The control of mosquitoes may also include adults as an additional measure in case of intense problem or disease occurrence. However, an appropriate combination of chemical and other control measures should be made in the framework of the integrated vector management to control mosquitoes efficiently, economically and safely with regards to humans and the environment.

There are various insecticides (biocidal products) registered in Greece which are suitable for control programs both against larvae and adults of Ae. albopictus in inhabited areas.

In particular, there are several formulations of larvicides registered in Greece containing the active ingredients diflubenzuron, s-methoprene, and Bacillus thuringiensis subsp. israelensis, which can be applied in stagnant water preventing from the emergence of the biting adult mosquitoes. The insect growth regulators diflubenzuron and s-methoprene, which inhibit the normal growth and development of larvae to adults, have low acute toxicity to mammals and humans and are considered selective insecticides. Bacillus thuringiensis subsp. israelensis (Bti) is a bio-insecticide (microbial pathogen) based on a bacterium that produces protein endotoxins during sporulation which destroy the digestive system of the larvae of mosquitoes after they have been ingested. Also, the control of the larvae in water tanks can be made by using a formulation of a larvicidal monomolecular film based on silicone, which acts mechanically inhibiting the larvae from breathing in water and adults from laying eggs. This formulation is applied directly to the water surface without spraying and is considered friendly to humans and the environment. Due to its mechanical mode of action this product is not registered as biocidal product. As regards the control of the Asian tiger mosquito adults, surface residual sprayings with registered insecticides (biocidal products) can be applied on surfaces outdoors, as in the case of other mosquito species. Most of those products contain natural pyrethrins or synthetic pyrethroids as active ingredients. Synthetic pyrethroids exert knock-down effect on mosquitoes shortly after their contact with sprayed surfaces. These ingredients are less toxic to humans, but are considered non-selective insecticides that can have an impact on beneficial non-target organisms, such as bees.

It should be noted that the application of insecticides intended for professional use should be performed only by Professional Control Operators. The instructions provided in the label about their use including the method of application and dose rates as well as precautions that must be taken for the protection of humans, animals and the environment must be fully followed. It should be also stressed that the ordinary sprayings for the control of the majority of mosquito species do not equally have good results against the Asian tiger mosquito due to the different bioecology in comparison to other mosquito species. Therefore, the effective control of this species can be only carried out at the level of municipality or other administrative units and should include the study of the presence of Ae. albopictus in a given area, the detection of potential breeding sites and the preparation of a comprehensive management plan that will include informing the public about the biology of this mosquito and the active participation against this species (e.g. elimination of small breeding sites around premises).

It should be finally noted that control programs against the Asian tiger mosquito as well as other mosquito should begin early in spring, in March and April, based on the climatic conditions of Greece, when the mosquito populations are still relatively low and therefore feasible to manage. Obviously, any delay in taking those measures will lead to an increase of mosquito populations, thus, their control will be then difficult. (Integrated management of arthropods of public health importance)